Skip to content
By March 31, 2021Country NewsLeave a Comment on Craig Campbell Is A “Family Man” Who’s Finding Out “What A Girl Will Make You Do”

Craig shares how the song that was inspired by his life – had a major impact on his career, “‘Family Man’ was released 10 years ago. This song will always be special for several reasons. It was a song I wrote when we found out we were gonna be parents for the first time. It was the song that got me my first record deal. It was the first song I ever released to country radio. I play this song at every show! ‘Family Man’ represents me and the music I always wanted to make. Now, I am making that kind of music again ‘What A Girl Will Make You Do’ is one of those.” 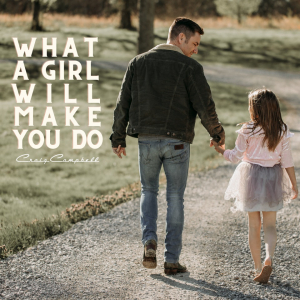 Craig’s family is continuing to inspire his music.

Talking about his new song, “What A Girl Will make You Do”, Craig says, “When this idea was thrown out at our writing session, I knew right away I wanted to chase it down,. Having two daughters and an amazing wife has been very inspirational in my musical journey.”

Craig shares some of the lyrics from his song come directly from his life, “My girls make me do crazy stuff…I said, you know, what other reason would it be for you to sit down in a chair that’s too small for you to hold a cup…with your pinky out, that has nothing in it, and pretend to sip on tea…so we actually wrote that last verse first, and worked our way backwards.”

Craig jokes that this song was an easy one to write, and now sing, because “I’m surrounded by girls…my wife, my two daughters…my dog! So, I’m inspired all day long from a woman’s perspective”

Check out this The Country Daily made lyric video for Craig Campbell’s “What A Girl Will Make You Do.”